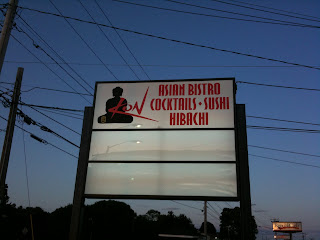 Welcome to the first of many posts where Dietz and I set out to get hammered on ridiculous drinks and sample the food at random Asian restaurant bars in the Greater Portland Area.

Kon Asian Bistro, located out by exit 8 on Brighton Avenue, occupies the spot formerly known as The Maine Super Buffet. I never made it out to the buffet during it's reign of terror, but I do recall a story told by someone who had...
It was a birthday party for what appeared to be a five year old. When it came time to open presents my friend witnessed the child open up a new Black and Decker Tool Set (probably purchased last minute across the street at Bradley's). Apparently the child seemed confused and the father seemed ecstatic... Nice. 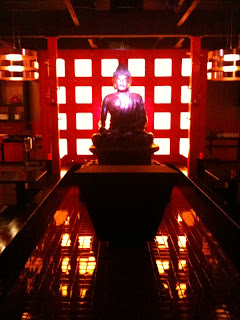 Our companions for this venture were Nolan (Beer Buyer - Downeast Beverage), Molly (Avid Drinker), and Edna (Local Bartender). We stumbled in already half in the bag around 8 p.m...
The owners clearly invested alot into renovating the space. A big golden Buddha greets you as you enter. We head straight over to the illuminated bar which we decided, after a few more drinks, was made of magic. Immediately I declare that I love this place..
To start I select the "Man Tai," a Mai Tai with twice the booze. At this point I decide to fire up the voice recorder on my phone knowing that a blackout was iminent.
I order food for the group. Overall, the quality is excellent. I focused on hot apps, though the restaurant has a full sushi bar (and Habachi tables - next time).
We Had:
1. Indian Pancakes: Delicious little flatbreads with curry sauce.
2. Mini Beijing Duck: Everyone loved these, especially the doughy house made "mini buns" to wrap around the duck.
3. Kon Lettuce Wrap: I liked that the lettuce wrappers were perfect ovals. The filling was delicious, kind of reminded me of an egg roll (at least that's what I listened to myself say on the recording a day later..)
4. Gyoza: I haven't had many Gyoza that I haven't liked but these were exceptional. Great filling and a perfect crust on the outside. 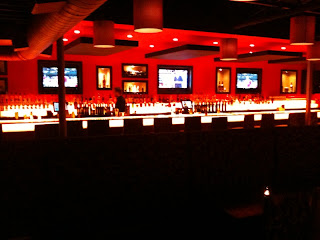 5. Hot and Sour Soup: This was the most disapointing dish of the evening. Even though it showed up with an opulent golden spoon, it was neither hot nor sour.
6. Garlic Chilean Sea Bass: The fish was cooked perfectly, with a nice crispy crust. The accompanying soba noodles were a little overcooked.
7. Rock Shrimp: Oh My Fucking God... This is one of my new favorite dishes in Portland. Crispy fried rock shrimp doused in a kewpie mayo sriracha scallion sauce... Fuck.. We devoured 4 orders of these and I (after listening to the recording) declared that they were amazing about 15 times..
8. General Tso's Chicken: Had to order it and I was glad I did. Everything it should be - fried, sweet, spicy, and delicious.
9. Beef Negimaki: I liked these but Dietz was indifferent. They did have a little bit of a "home stir-fry kit taste," but I thought they were decent.

Halfway through all of this Dietz decides to officially send me spiraling into an abyss of drunken insanity by ordering a scorpion bowl. This enormous bowl of liquor tasted like exactly that, sucked through a foot long straw. Dietz also declared that we needed to drink the puddle of Bacardi 151 used to set the drink on fire - which didn't help my cause either. I tried to convince him to snort it, but to no avail. 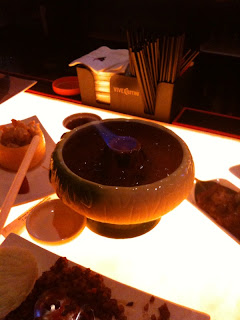 The only problem with using magic as the material for your restaurant bar is that it clearly illuminates the mess you've made with the food. The prices are very reasonable, I think, I don't really remember.. I felt that I needed to try a regular Mai Tai after the dreaded scorpion bowl and the conversation began about the next move for the evening. I suggested the Strip Club but Edna protested, saying that Mondays are "Totally B-Team over there." Nolan and Molly decide (wisely) to call it a night. We somehow end up at Vignola (because if there's anyone who won't judge me for being such a fuck-up, it's Steve Sousa) where I barely get through saying hi to everyone before I decide that I have no business being in public... I am graciously escorted home where I open another bottle of wine, drink about a glass, and finally pass out.. 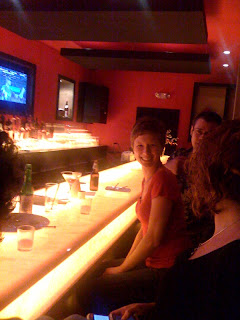 I'm excited to go back to Kon, as I'm sure it will catch on as a place for strippers to go hang out and drink before and after their shift. Everyone wins here, because not only are strippers fun but they love to spend money and tip very well.

The only thing this place is missing is an opium den...
Posted by Caligula at 7:21 AM

Caligula
The Only Thing I Don't Like to Eat? Peas. Also... Natto Beans.

Who's Telling Me What

What Do you Need?